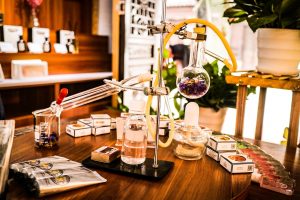 When should you be concerned if your bottle is fake? Well, here are a couple of reasons when it’s a good idea to check if your Cool Water is fake or not:

If any of the previous signs concerns you – please answer the following 5 questions. Some questions are a definitive indicator of a fake bottle. And others could indicate the Davidoff Cool Water Original VS Fake.

#1 Is the name spelled correctly?

This one is a definitive indicator that you’ve got a fake Cool Water bottle. Even though it may seem obvious to you… I’ve recently read a couple of discussion where a person asked if his bottle was a fake.

And the name on the box was Davidofe…

Please don’t be so naive. The name on the box will always be Davidoff.

If there’s anything else written on it, then you can be sure that someone has been faking it. I repeat, if the name on the bottle is not the original Davidoff Cool Water – then please don’t buy it.

The name is not the only thing that indicates whether you’ve got a fake or not. Some producers of fake perfumes spell the name correctly, but then change the way the box looks like.

Above I’ve put a picture that shows you exactly what the box should look like. If you’ve got a different box – then you’ve bought a fake bottle. Or if you haven’t bought it yet, don’t buy it!

Before you buy a perfume you should always test it. Spray a bit on a test stick (or your wrist) and see if the perfume smells like it should. If it’s a bit watery or muddy, then it can be fake. Or if the smell if very chemical, then it’s better to not buy it.

The difference between Davidoff Cool Water original VS fake is that the fake one:

Tip: whenever you’re flying (or at a good perfume store), try out the testers in the duty-free shops. Make a mental note of how the perfume smells and check how long it lasts on you. If you’ve come across a street seller later, you can then compare the 2 scents and see if it’s a real or fake perfume.

Smell is subjective and sometimes the formula of a perfume is changed over the years – so if the smell i slightly off it doesn’t have to mean that the Cool Water isn’t the original one. If the answers to questions 4 and 5 are also suspicious, you’re better off not buying.

Another good indicator that you’re buying a non-original perfume is that the price is way off. If it’s a lot cheaper than the regular retail price (barring a special sale for the holidays), then chances are high that you’re buying a spin-off. After all, if it would’ve been the real Davidoff Cool water… it wouldn’t have such a low price!

#5 Is the seller reputable?

If you’ve answered the previous questions and you’re still not sure if you’ve got a real Davidoff Cool Water perfume or not. Then it’s a good idea to check the seller.

Is it a large department store that only sells other good high quality brands that has been around for a long time? Chances are high it’s a real bottle.

Or is it a small store in a foreign country that looks like they would even sell your kidneys if they could get their hands on it? Then you’re better off skipping the store.

And as for street sellers: I’d argue against them. There might be some who sell quality perfume but the majority (read 95% and higher) are selling the fake products.

You’ve reached the end of this article. So by now you should have a good idea if the Cool Water bottle you’re about to buy is an original one. If you’re still not sure – but really want the original one… then it’s better to wait and buy it from a reputable store.

Cool Water is a great scent that suits many people. And I’ve always gotten a clot of compliments when wearing it. If you’re unsure where to buy the original Davidoff Cool Water, I recommend you get it on Amazon:

P.S. did you know that Davidoff Cool Water is one of the best rated perfumes out there by blind tests? Order your ORIGINAL Cool Water here!